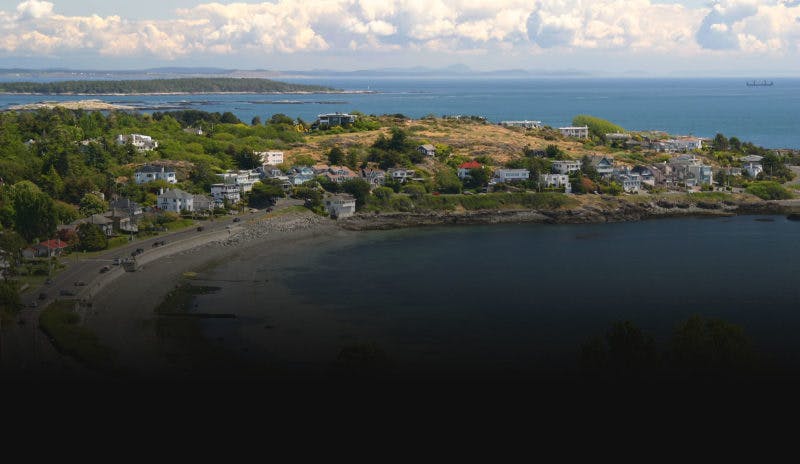 Oak Bay: The Making of a Suburban Landscape

By Larry McCann, Professor of Geography, University of Victoria

Oak Bay, located on the sea-rimmed, southeastern edge of Greater Victoria, was incorporated a century ago, in 1906. Today, it is home to nearly 18,000 people. For these residents and visitors, too, the physical landscape contributes mightily to Oak Bay’s picturesque charm. Along the waterfront, wave-whipped bays, sandy beaches, and rocky ledges offer enduring natural beauty. Inland, just steps away from the sea and adding to Oak Bay’s allure, are Garry Oak meadows, granite hills and knolls, and attractive gardens of exotic plants, shrubs, and trees. Notable too – but unwittingly so – is the view beyond Oak Bay’s borders, towards the Sooke Hills and the more distant Coast and Olympic Mountains. Of equal importance, and our focus here, are the features of a century-old suburban landscape, some common, some not: Take, for example, gridiron streets and narrow back lanes, a vibrant village core, the labyrinth design of the Uplands, and – not least – an eclectic architecture of diverse suburban tastes.

Oak Bay has experienced distinctive phases of development. For many centuries, the families of Aboriginal clans camped seasonally or lived permanently at several tidewater sites, notably beside Willows Beach. By the mid¬nineteenth century, the Hudson’s Bay Company and several of its former employees had taken control of the nearly 2,500 acres of land (c.1,000 ha or c.10 sq km) that make-up Oak Bay’s domain. In time, small farms were established on pockets of rich soil lying around McNeill Bay, beside Bowker Creek, and north from there. The much larger c.1,100-acre (c.445 hectare) Uplands Farm, operated by the Bay Company, stretched inland from Cattle Point to blanket the elevated, plateau-like northern district of Oak Bay. The farm comprised a few fields in crops, pastures for grazing horses and cattle, and market gardens leased to Chinese, all scattered among Garry Oak meadows and a mixed forest of cedar, fir, and maple trees.

Later in the nineteenth century, Oak Bay was revered for its recreational spots, a prelude to suburban development. Victorians and folk ‘from away’ built cottages at many points beside the sweeping bays, while out-of-town visitors camped by the shore or rented rooms at seaside resorts – the Mount Baker Hotel, Old Charming Inn, and Oak Bay Beach Hotel, of which only the latter remains, at least for now. Others came on weekdays, many more on weekends, travelling in horse-pulled hacks or riding the new-fangled streetcars that ran along Oak Bay Avenue and Cadboro Bay Road, terminating, respectively, at Oak Bay (now Windsor) Park or the Exhibition Grounds. At these and other ‘pleasure grounds,’ people could watch or bet on horse races; enjoy lacrosse, cricket, and rugby matches; sunbathe, swim, and fish; or golf at the nearby seaside Victoria Golf links (established1893), the oldest Canadian golf course still occupying its original location.

By the early-twentieth century, municipal incorporation was a catalyst for suburban growth. Reliable transportation and newly-laid sewer and water pipes provided land developers, contractors, and homeowners with incentives to build at first on lots near Oak Bay Avenue, Cadboro Bay Road, and the central waterfront district. Oak Bay Village, the municipality’s historic centre, emerged at this time. Here the Municipal Hall, post office, high school, and nearby churches formed the nucleus for attracting various business services. (Incidentally, on a per capita basis today, Oak Bay has more financial institutions serving its population than any other municipality in Canada.) By the close of the land boom period (1906-1913), almost all of Oak Bay was subdivided. Houses were still few and scattered about, sprawl-like; the infilling of vacant lots would follow later, and is still on-going.

Enumerators taking the Dominion of Canada’s Fourth Census in 1901 recorded nearly 500 inhabitants. In sum, these people shared traits that have characterized the social order of Oak Bay throughout its development. Generally, people lived together as families; they came mostly from eastern Canada and the United Kingdom; were overwhelmingly British and Protestant; and worked at a variety of trades and professions. During Oak Bay’s initial growth, the wealthy, middling, and labouring classes intermingled frequently, sometimes living side by side on the streets of assorted subdivisions.
However, as Oak Bay’s population grew, reaching 5,400 in 1931, then just over 9,000 ten years later, and almost 11,000 at mid-century, the social topography of class mixing showed signs of erosion. This was finalized after the frenzied construction boom of the 1950s and early-1960s, when the municipality was at last built-out. By the early-1970s, the middle-class stood in overwhelming majority, even forming the whole of some newly-settled residential districts in north Oak Bay. Within its ranks was an ever-increasing number of retired people. It is just recently that families with young children have once again gathered strength, notably in south side neighbourhoods.

Before mid-century, Oak Bay’s landscape was characterized overwhelmingly by single-detached dwellings. Few of these are Victorian-styled houses, but in older southern and central districts, most street blocks display a mix of hipped-roof, California, or Craftsman bungalows, two-storey eclectic cubes, and sometimes a fine Samuel Maclure designed Arts and Crafts cottage or four-square Colonial Revival. Fortunately, some of these are now protected by heritage bylaws. During the inter-war years of intensive infilling, ‘minimal traditional’ English Tudors (typically of one-and-a-half stories) became the architectural style of choice, seldom Art Deco or Art Moderne houses. By the 1950s, larger houses were favoured. Most were built in the low-slung ´rancher’ style. This type predominates across north Oak Bay, including in the Uplands. More recently, an eclectic mix of even bigger neo-modernist styled dwellings has satisfied varied suburban tastes: Arts and Crafts revivals, mock Georgians, and flat-roofed cubes occasionally rub shoulders with ‘po-mo’ structures of ambiguous form.

Social change has affected the types of housing built in Oak Bay. After the Second World War, many of the large mansions found in south Oak Bay, especially those along Foul Bay Road, were converted into large suites. Older dwellings fronting bus routes and waterfront sites were torn down, making way for walk-up and high-rise apartments that offered units for rent. Some went to young couples, but most were taken-up by the recently-arrived widowed and retired set. A few projected housing plans were thwarted, including an early-1960s urban renewal scheme slated for Oak Bay’s western flank, between the ‘Avenue’ and Cadboro Bay Road. Its intention was to replace the older, working-class housing of ‘Poet’s Corner’ and nearby streets with town houses, garden apartments, and parkland, but came to naught.

Most of Oak Bay’s street system was laid out in gridiron or quasi-gridiron fashion, with two notable exceptions. The first is the Uplands, a bourgeois subdivision of gracefully curving streets and large properties that occupies a waterfront and inland site of 465 acres (c.190 ha), almost one-fifth of Oak Bay’s total domain. The Uplands was the first of its kind in Canada. It was designed in 1907 by the famous American landscape architect, John Charles Olmsted, for a land syndicate headed by the Winnipeg-based developer, William Hicks Gardner. On completion, John Olmsted identified the Uplands as his masterpiece of suburban residential design. The impact of the Uplands on Oak Bay has been profound, influencing, for example, subsequent zoning and town planning schemes that favoured bigger houses, which in turn drew in more middle-class people.

Breaking the grid, too, was a 620-acre (c.250 ha) property, once part of the Uplands Farm, that yielded three subdivisions and another Canadian first: Lansdowne Heights, Crestview Heights, and Lansdowne Park. Developed by the Hudson’s Bay Company’s Land Department from the late-1930s to the early-1960s, they formed the first town planning scheme in Canada to use the now-ubiquitous neighbourhood unit planning principles pioneered by Clarence Perry, an American sociologist. The Lansdowne Park component was originally designed to push beyond Cedar Hill Cross Road, ending at the Oak Bay – Saanich border, but its northward thrust was halted in 1961 when Victoria College (now the University of Victoria) bought 120 acres (c.48 ha) for use as part of its suburban Gordon Head campus.

Today, more than 20,000 undergraduate and graduate students are enrolled at UVIC; and the institution ranks among the top multi-purpose universities in Canada, offering a wide range of liberal arts, science, and professional programmes. Students come mostly from Victoria and the rest of Vancouver Island, less so from the Lower Mainland and interior British Columbia. Increasing numbers of students now hail from Asia and South America, adding diversity to Oak Bay’s cultural mosaic.

While small parts of UVIC’s campus remain in their former orchard, pasture, or forest state, Oak Bay’s largest (and almost) natural area of treed and grassy space is Uplands Park, a 76-acre tract carved from the Uplands subdivision in 1946. On its grounds, fronting Beach Drive, a Cenotaph celebrates Oak Bay’s fallen war heroes. A short walk away, the Esplanade, developed in the 1950s, links Uplands Park with Willows Park, Oak Bay’s oldest (estab. 1912) and a place for public celebrations. There are more than twenty other parks scattered throughout the municipality. Most are quite small, but some are slightly larger, including Carnarvon, located on the site of the old Exhibition Grounds; and Walbran, sitting atop Gonzales Hill near the old Dominion Observatory. These two parks offer venues, respectively, for playing organized sports or for looking over Oak Bay in its entirety.

Yes, there is much to see when exploring the historic pathways of Oak Bay. The making of Oak Bay’s distinctive suburban landscape offers a record of accomplishment to be considered and enjoyed by resident and visitor alike.